August 18, 2022 The Decline and Fall of American Empire
August 16, 2022 Welcome to the World of Bankster Magic Where We Shall Have “Weather Followed by More of the Same Unless it Changes.”
August 10, 2022 Unemployment is the Cloak under which this Dagger of a Recession Hides
August 03, 2022 Economic Predictions for H2 2022, Part 2: The Great Currency War for Global Dominance
July 29, 2022 REAL GDP SAYS: “Get Real! Trust not the Fed, economists or the president. The REAL economy is collapsing all around you!”

17 hours 18 minutes ago
The Short Position in SLV
23 hours 24 minutes ago
Here Is Why Silver Demand Will Climb to a New Record High! - Keith Neumeyer
4 days ago
This Is Why NOW Is the Perfect Time to Buy Silver - Garrett Goggin
4 days ago
Rico Charges Dropped On Silver Manipulation Trial
4 days 22 hours ago
Has Inflation Been Defeated?

The Market Damage History Shows You Can EXPECT from Fed Tapering

In an effort to prove the Fed’s tapering won’t matter, I recently saw one stock advisor claim that, when the Fed tapered its QE from late 2015 into 2016, “the stock market rallied 60% in an almost straight line higher.”

Wow! Let’s take a look at that! Here is what the stock market actually did from the last of half of 2015 through the first half 2016: 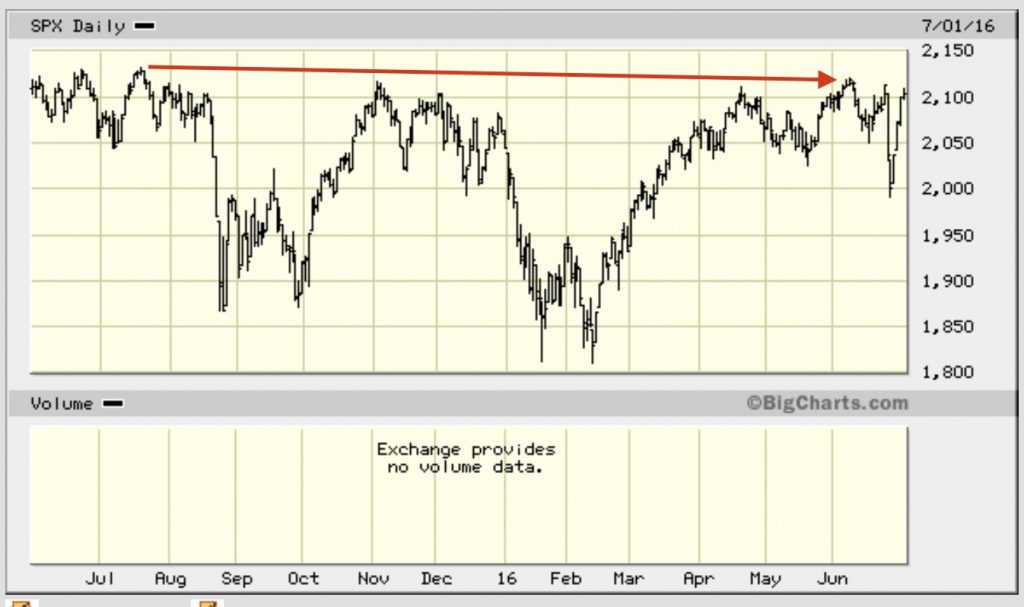 Apparently, any misrepresentation of history will do in order to try to maintain a long-lost argument. The Fed tapered its asset purchases during that time, and the bull was lying on the ground, panting and dripping with blood like it had faced a great Spanish matador. A look at the facts above will show you that from the latter half of 2015 through the middle of 2016, the market went absolutely nowhere! In fact, it went nowhere throughout the Fed’s full tapering period with a great deal of lunging and stumbling just to get to nowhere.

I presented only the part of that tapering period in the graph above because I wanted to focus the graph specifically on the false claim made above. A broader view would show that in late October of 2016, you could have bought in at the same price you sold out for at the start of 2015 right after tapering began.

Only the Trump Rally brought life back into the wasting bull. When Trump got elected in early November, 2016, everything changed because of his promised massive corporate tax cuts that would put enough cash back on the corporate board-room tables to offset all of the Fed’s tapering. (But this time Biden is promising to take most of that bottom-line cash back off the table at the same time the Fed tapers! Not a good combo for the market.)

It’s a shame when narratives that are proffered to support positions that have been wrongly argued have no basis in truth to the point of even trying to rewrite obvious historic facts.

Now, maybe you are generously thinking, “Perhaps it was much better for the roaring NASDAQ.” 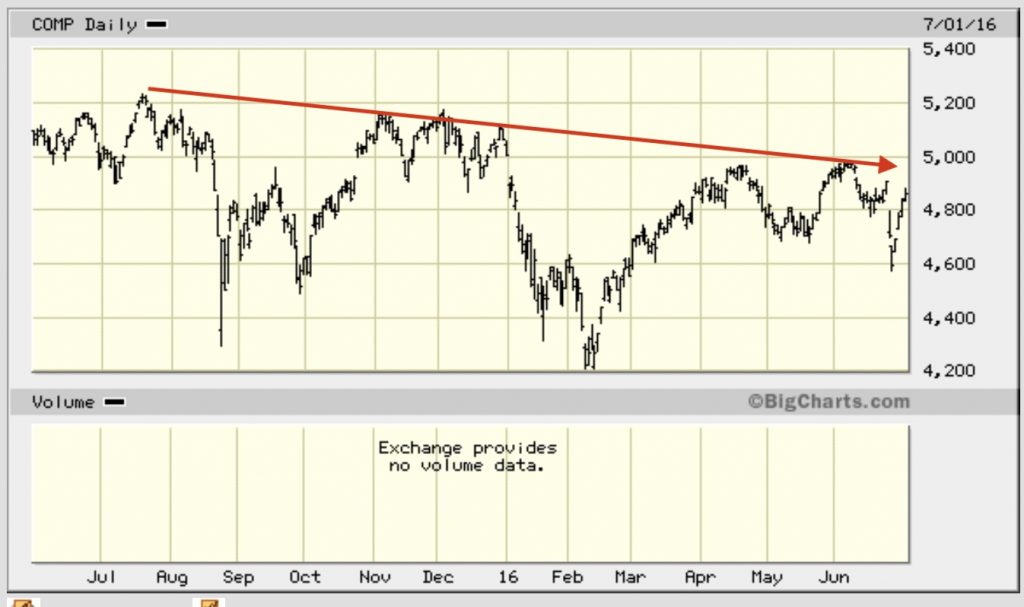 It was much worse! The NASDAQ crashed almost 20% from its last high. In fact, it came within a hair of being an official bear market, and it didn’t recover from its deepest low for more than half a year (when the promise of the Trump Tax Cuts changed the calculus for the anticipatory stock market.)

This is an example of how writers who don’t care about full truth can cherry-pick one little part out of a period to say the market did fantastic during the Fed’s tapering. Clearly, there are some steep slopes of short duration during that period where the market did rise a lot. However, when you see those rises in context, you can immediately tell the market was merely rising out of an equally large hole it had just plunged into, and it didn’t even make it all the way out! In fact, it rose from one crash only to plunge back to a deeper level and then partially recover to a lower high from which it continued downward. In other words, the market was a train wreck for the entire two-year tapering period, and the worst of that period happened in late 2015 and then again in early 2016!

At no point, however, did any of the major indices show a rise — even during those short recoveries from bearlike plunges — that came anywhere near 60% or a straight line! (More like a 20% rise only to fall again.) So, the writer above went far from just playing loose with the truth, and that was tapering, not tightening.

That is what HISTORY says you can expect from Fed tapering — a train wreck! But, today, the Fed is talking about speeding up tightening, too, with interest hikes to immediately follow the tapering. (They’ll never get that far, of course, but the Fed will wreck a lot of damage trying.) During actual tightening in 2018 the market did much worse, even with the help of those tax cuts because the tax cuts could not overcome the new downdraft from the Fed to such a point that Trump kept harping at the Fed to stop tightening. This is what history says you can expect from actual tightening: 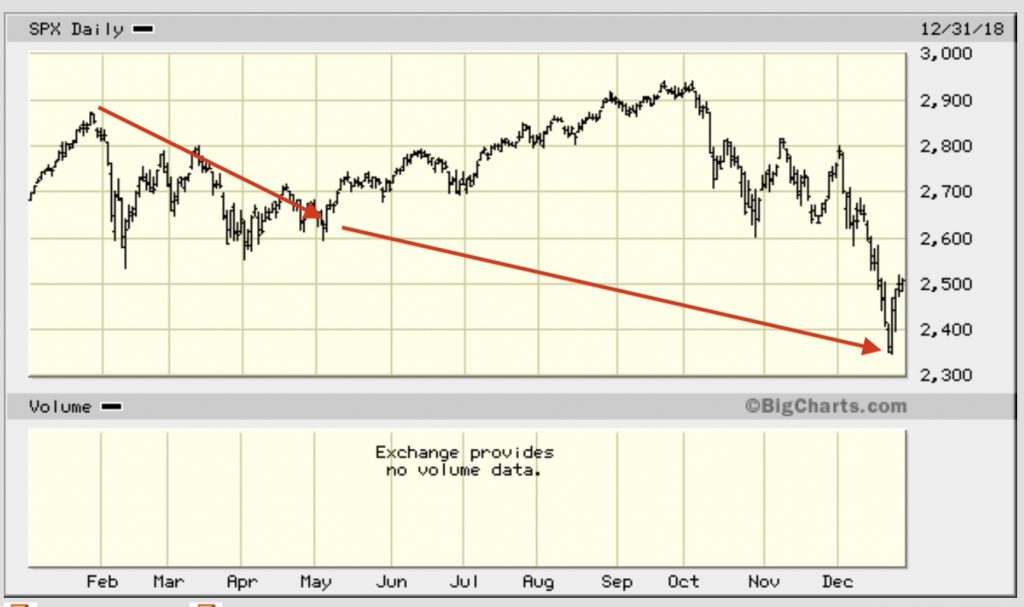 Not a pretty year. From the time the Fed doubled down on its initial slow tightening rate near the end of January, 2018, to the the end of that year, the market experienced nothing but peril to end the year well below both its January high and its 2018 start.

Those who want to maintain their denial about where Fed actions will take us might try to counter these historic patterns by pulling out the tired mantra “but this time is different.” To which I will respond, “Yes it most certainly is! This time is FAR more fragile and far more likely to face great disruption due to the severe global disruptions I laid out in my last two articles that are already happening (“Shortages and Inflation Are Ripping the World’s Face Off” and “Stocks and Bonds Starting to Tussle“).

In my next article, I will be laying out greater dangers that are developing just as the Fed plans to start to taper. In essence, the last time the Fed was tapering it was because it appeared its Great Recovery had been a success. This time the Fed is advancing its tapering timeline because it is being forced by soaring inflation, not because recovery is complete. That means the Fed will start to taper during a time when an incomplete recovery has left us with high unemployment and as the recovery is already rapidly falling apart under the ravages of inflation and shortages and a continuing pandemic, and when economic damage from the COVIDcrisis remains splattered like blood all over the globe during the onset of a global energy crisis at a time when other central banked are also starting to taper or tighten! And then there are those added pressures governments are putting in place, which I’ll be covering.

And some people think that’s going to go better??? It looks more like planned destruction to me. In fact, I now think the most recent actions and plans of governments and of central banks in the present environment are leading us into global economic collapse.

See you on that in my next article.