From Powell to Brainard

So what happened last Thursday? Why did bond yields suddenly plunge while COMEX gold prices soared? Was it simply a reaction to the latest FOMC meeting, or is there something behind the scenes that bond and gold traders have begun to sniff out?

Let's start with the bond market. Last Wednesday finally brought confirmation that the Fed was planning to taper their existing QE plan. In fact, the tapering is actually now scheduled to begin this month! This removal of some of the Fed's ever-present bids in the bond market should lead to lower bond prices and higher rates. At least that's the traditional opinion as put forth by mainstream economists and pundits.

However, if that's the case, then how do you explain the chart below? On Tuesday morning—and with producer prices in the U.S. now annualizing near 9%!—the bond market has rallied again. How much? Right after the conclusion of the FOMC and taper announcement, the yield on the U.S. 10-year note hit 1.61%. Below you can see that, as I type, it's at 1.44%. That seventeen basis point move equates to a drop of over 10%! What the heck?

At the same time, any sort of "traditional" analysis would have generated an expectation that gold prices would fall after the Fed's taper announcement. Why? Because the Fed is supposedly planning to dial back their debt monetization and draw it all the way down to zero by mid-summer 2022. But that's not what has happened.

Despite the creation and addition of over 50,000 new COMEX gold contracts by the market-making bullion banks—a desperate attempt to dilute the float of contracts and thereby suppress the price move upward—COMEX gold has surged by nearly $60 since last Wednesday. Again, why?

So what's going on here? Actually, we've been discussing this since last Thursday at TF Metals Report, and I think I know the answer. Let's start with this...

At his press conference following the conclusion of last week's global warming summit in Scotland, U.S. President Biden was asked directly if he was planning to renominate Jerome Powell as chairman of the Fed. Instead of directly endorsing Powell, Biden hemmed and hawed. He stumbled and stammered and, eventually, stated that he would announce his choice in due time. This alone should have been proof that Powell's renomination is not the fait accompli so many believe it to be.

Biden then flies back to the U.S. late Tuesday and then takes most of Wednesday to recuperate and readjust to U.S. time. He then gets back to work on Thursday, and what is on his schedule? A White House meeting with Powell AND Fed governor Lael Brainard. See this Reuters tweet from that day:

Hmmm. Well, now. What do we have here? And this meeting has since been confirmed. See this from Bloomberg, posted Monday evening, the 8th:

So let's connect some dots. Shall we?

When Biden was given the opportunity to endorse Powell for another term, he backed away and said nothing. Then, once he's back in Washington, one of the first things he does is call both Powell AND Brainard to the White House, where he then proceeds to "interview" Brainard. As this happens, the smartest traders on the planet begin to bid up U.S. bond prices to the extent that yields rally nearly 10% in just two days, while gold suddenly breaks above its 200-day moving average and begins to finally break out of a year-long slump.

Is the picture now clear enough for you?

In a move to appease the progressive wing of his party, Biden is very likely to nominate Lael Brainard to succeed Jerome Powell as Fed chair when Powell's term expires in February of next year. Not only is Brainard a "diversity hire", she's also an uber-dove when it comes to monetary policy and a closet proponent of Modern Monetary Theory.

Biden and his Democrats know they need all the easy money they can get in order to fund their multi-trillion-dollar spending programs and Powell, as an old-line Republican-nominated Fed chair, is unlikely to give it to them. Therefore, the plans to remake the Fed have been put into place.

You've no doubt seen the leaks and subsequent reporting of the insider trading by Fed governors Kaplan and Rosengren with many of the same issues plaguing vice chairman Clarida and even Powell himself. These revelations have led to an unprecedented stream of resignations and early retirements, the most recent being Monday's announcement from Randal Quarles:

As that CNBC link states, Biden will now "have a chance to remake The Fed". And he's going to. And it's going to start with an announcement sometime in the next two weeks that he will not be renominating Jerome Powell for a second term and will instead nominate Lael Brainard as his replacement. 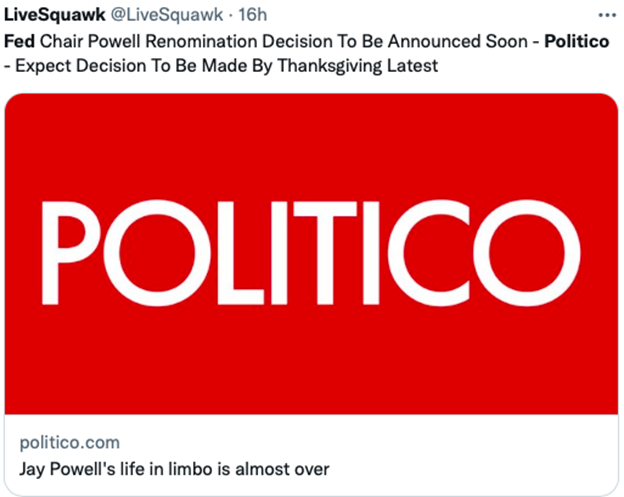 Again, THIS is what the bond market has sniffed out and THIS is why yields are plunging and gold is soaring. The "Fed Put" will soon be back as debt monetization is taken to a whole new level by The Biden/Brainard Federal Reserve in 2022.

Could I be wrong about all this? Of course! I'm just a dope with a MacBook attempting to connect all the dots. However...IF I'M RIGHT...then gold and silver prices are about to explode higher in that "gradually and then all at once" move that I've been writing about for months. And this won't just be a three-week rally that peters out and fails. With Brainard leading a "remade" Fed, you're about to see a multi-year surge in nearly everything, not just the precious metals—stocks, commodities, real estate, crypto...you name it. If it trades, it's very likely to head higher in the months and years to come.

So be ready and pay attention. The picture is coming into focus, and 2022 will be nothing like 2021. If you've been waiting to acquire some physical precious metal as protection against the madness, you'd be wise not to wait much longer.