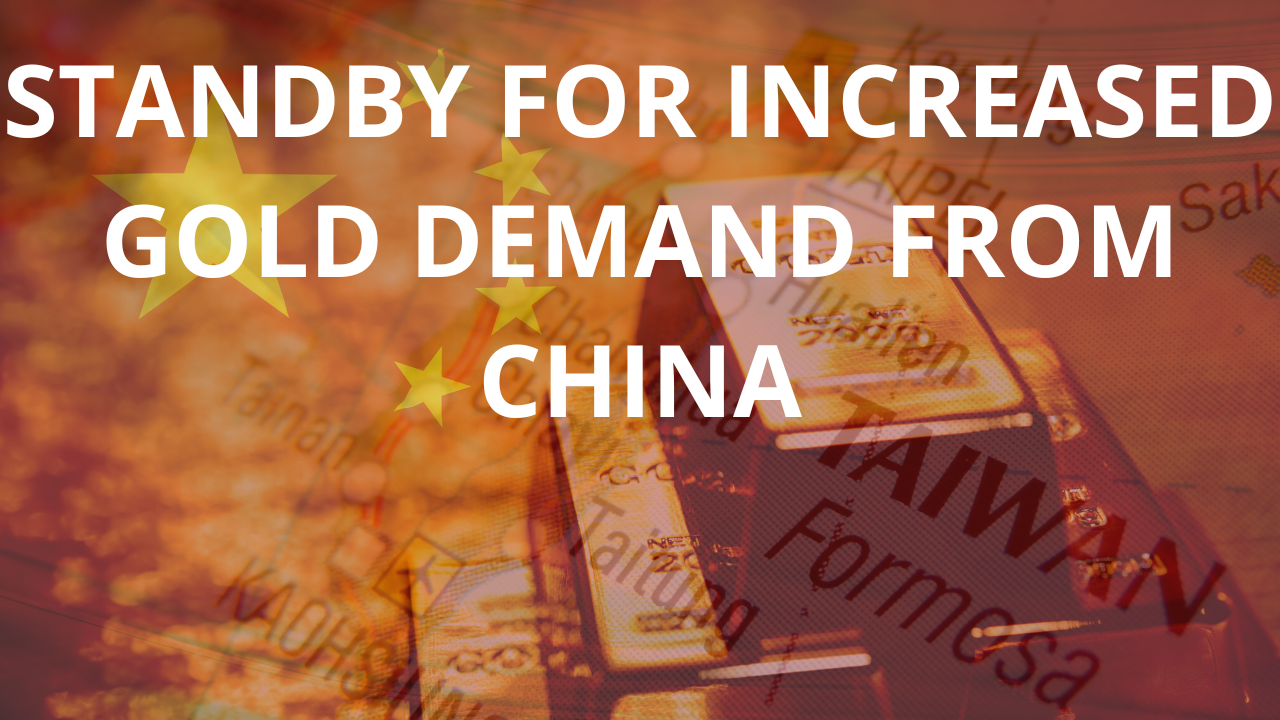 Anyone who pays attention to global gold demand knows that China has been at the forefront of gold imports and central bank purchases for many years. To own gold bullion is something that is not only important to the Chinese government but also to Chinese citizens who have sought to buy gold bars and coins as both a means of investment and also as a way of celebrating many occasions.

Sadly the expected increase in demand for gold from China is not because of a celebration, instead, it is due to the increasingly-heightened tensions between itself and the United States, both vying to be top dog in an increasingly polarized world.

Nancy Pelosi’s visit this week has the world trying to work out if Taiwan is the next crisis we’ll be contending with. Here’s what we think this means for gold.

Nancy Pelosi’s visit to Taiwan increases tensions between China and the US will push China to further its quest to ‘de-dollarize’. Also, push for alternative payment methods besides the US dollar. And it is no coincidence that the gold price has risen US$100 over the last 10 days as tensions leading up to Ms. Pelosi’s visit have increased.

Ms. Pelosi is an accomplished career politician who currently serves America as its Speaker of the House of Representatives (head of one of the three branches of the US government). She has held that role since January 2019 (and previously between 2007-2011). Ms. Pelosi’s role as Speaker of the House puts Ms. Pelosi second in line to inherit the US Presidency behind Vice President Kamala Harris.

She is the senior-most official to visit Taiwan in more than a quarter century. The last was Newt Gingrich (then-Speaker) in 1997. Senior US officials have not visited Taiwan since China joined the World Trade Organization in an effort to build a stable US-China relationship. The problem is that for reasons of history, China believes that it owns Taiwan. It should be in control of Taiwan and wants America to leave Taiwan alone so that China is unfettered.

Suffice it to say that although Nancy does not actually speak for the country on matters of policy her actions matter because of the important office she holds. Tuesday this week she decided to visit Taiwan in person.

The presence of Pelosi in Taiwan means that America cares about Taiwan. Also, by Pelosi meeting with the leaders, she validates and recognizes those Taiwan leaders as authority, and this infuriates China.

China constantly threatens Taiwan with reunification by force. And to flex this force China ran military exercises aimed at Taiwan as Ms. Pelosi landed in Taiwan. Chinese officials have threatened countermeasures and sanctions if Ms. Pelosi included Taiwan in her Asia tour, which also includes Singapore, Japan, and South Korea.

Taiwan is just one of many friction points in the complicated relationship between the U.S. and China. See our January 5 post Four Geopolitical Issues that could Drive the Gold and Silver Prices Higher in 2022

For the last five decades, the United States of America has been acknowledged as the leader in both military size and economic size.

Less heralded but maybe as important is that since 1945 the U.S. has by far held the most physical gold out of any government in the world. The U.S. holds 8,133 tonnes in official reserves, the next largest is Germany with 3,355 tonnes.

Why China is Increasing its Gold Reserves?

Gold matters to nations, the same as individuals, because it has zero counterparty risk. China believes that its future is to eclipse America in economic size.

Although they are cagey about releasing details China has been increasing its official gold holdings. China has increased its ‘official’ gold reserves to 63 million ounces (1948 tonnes), now the sixth largest behind the US, Germany, Italy, France, and Russia.

However, reporting of official reserves has been very intermittent since China joined the Word Trade Organization in December 2001.

With the next increase not reported for eight years until 2009, and then later leading up to the Renminbi inclusion within IMF’s Special Drawing Rights (SDR) basket of currencies. (The SDR is a made-up currency used to supplement assets at the IMF.) There is little doubt from most gold market observers that China’s unofficial reserves are much higher than reported. 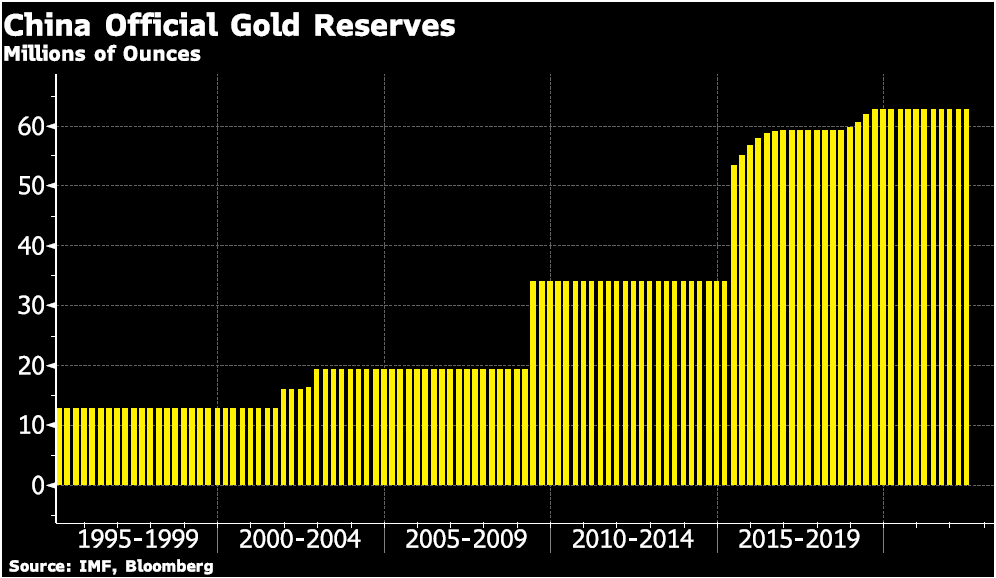 Nonetheless, China has a long way to go to increase its gold reserves to the size of the US reserves. China can only catch America by mining its own gold, and/or buying gold elsewhere and moving it to Chinese vaults. There is an old adage that whoever owns the gold makes the rules. Ever since this is largely true China wants to own more gold.

The government of China is not the only Chinese entity wishing to own physical gold. Millions of Chinese families, like millions of Indian families, use gold as their savings accounts because of limited access to and non-trust of bank accounts.

The chart below shows China alone accounts for about 20% of global consumer demand. This is likely to increase after the recent problems investors have faced withdrawing money from Chinese banks! 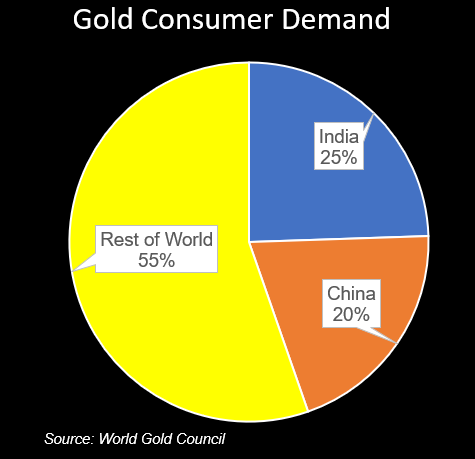 There is reason to believe that, like official holdings, China reports this estimate much lower than actual production. The Chinese government has reasons to under report results to gain an edge over the Western countries, especially the U.S.

China’s official import data shows a sharp increase in gold imports in June 2022. We will not be surprised to see this number climb further in the coming months. 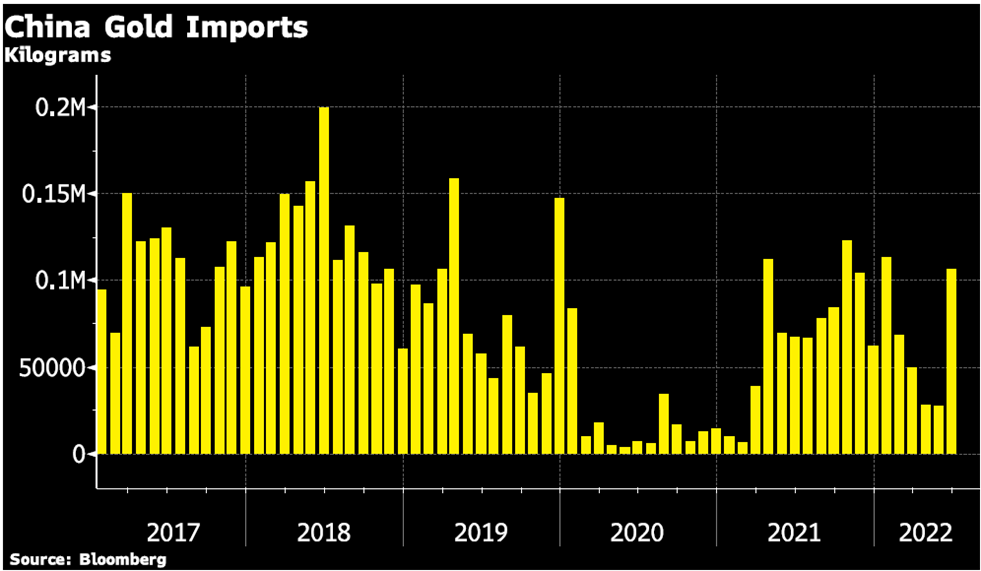 Complicated Relationship between The US and China

The relationship between China and the U.S. is indeed complicated as the U.S. consumer has relied on China for cheap goods for the last twenty years. While China relies on the U.S. as the main place to export its goods, which helps build its economy.

Indeed, China does still hold close to one trillion in US Treasury securities, which were purchased with the U.S. dollars that flowed into China as exports of China’s goods flowed to the U.S. 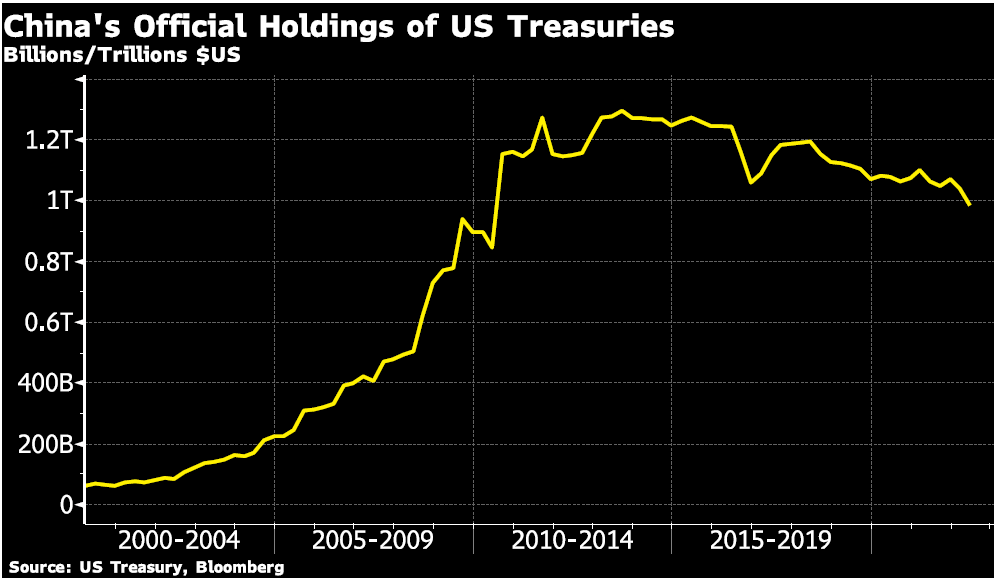 This relationship has been severely strained for the last six years and Ms. Pelosi’s visit to Taiwan is a major crack that could expand, as it goes against the grain of the relationship.

China and Russia are ever more on high alert and the move to a de-dollarized world is becoming more imminent. Both countries realize that the country that controls the most gold has the advantage. These moves take time, but the process is in motion.

The rally in gold since July 21 could indeed be all levels of China’s participation in increasing gold holdings and this is only the beginning!

With central banks trying to work out what to do next in an era of ever-rising inflation, and geopolitical tensions on the rise the numbers are adding up to create the perfect environment for higher gold and silver prices.

To hear more about the move away from the US Dollar as the global reserve currency why not check out our new show The M3 Report? Jim Rickards, Marc Faber and David Morgan each spoke to us about the changing dynamics of the global currency system as both China and the US compete for control.