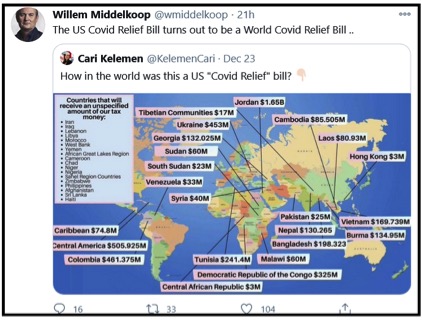 WHAT WILL HELP US LIVE LONG AND PROSPER?

WE NEED DETAILS… What will create prosperity?

a)  Be born into a wealthy family. This is beneficial but not retroactively available.

b)  Chair an important committee in congress for several decades. The salary is good, and the “benefits” are great. Fantastic wealth is available to those who pay the price. The non-tangible cost can be high.

c)  Invest in a big winner at the right time—like Apple stock, Microsoft stock, Tesla stock. Caveat: You must exit at the ideal time. This is possible, but few people are sufficiently skilled and lucky to take advantage of it.

d)  Realize the “game” is fixed and “hard-wired” against almost everyone outside the elite. The rich get richer because they “write the rules” and work those rules in their favor.

e)  Stick with real money—gold and silver—and be wary of wasting assets—like digital and paper dollars that are unbacked debts of the Federal Reserve.

f)    Daily living in our present world demands we use those “fake money” dollars for transactions. But their purchasing power will decline every year until they fall into the dustbin of financial history—like hundreds of other failed currencies. Save with real money.

WHAT ELSE IS NECESSARY?

Official national debt exceeds $27 trillion. We pretend it will be repaid, but it grows every year. It can’t be paid with current dollars. Therefore, it will be defaulted, (Sorry, just kidding about paying it back…) or it will be hyper-inflated away. (Sir, your tall coffee is on special today for only $112. Filling your truck’s gas tank costs $2,000. A share of Apple stock sells for $1,500. Gold costs $18,000 per ounce.) Hyper-inflation is destructive, and it could happen again in the U.S.

Student loans are not discharged in bankruptcy.

Many public pension plans pay out enormous benefits, more than they can afford. Plans are under-funded, some must borrow to make payments, and thereby become more under-funded. Debt trap! Promised pension benefits could disappear like morning mist.

AVOID OR MINIMIZE CONSEQUENCES FROM THE DEBT TRAP!

The Fake Money Cycle makes it difficult for everyone but the financial elite to live long and prosper. The cycle is a trap that leads to financial disaster. Expect inflation or hyper-inflation and a monetary reset.

The Fed might be forced to back “new-dollars” with gold—but only to convince Americans that “new-dollars” have value and are not worthless paper. 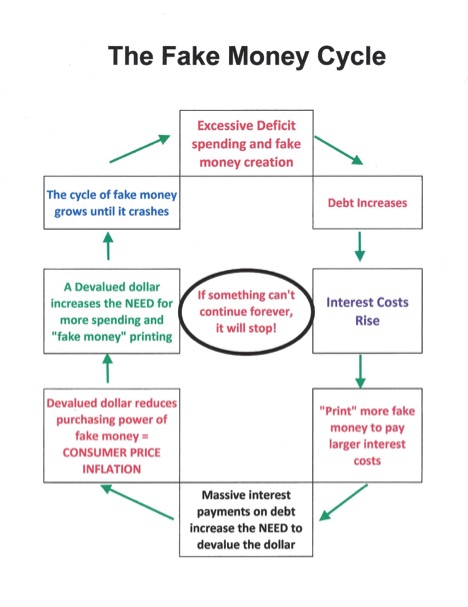 Non-mainstream wisdom from Alasdair Macleod: “The Psychology of Money.”

“The world stands on the threshold of monetary hyperinflation with the US dollar leading the way.”

“… hyperinflation of the quantity of money will destroy the mainstream’s dreams.”

“Now that fully two-thirds of US Government spending in the second half of fiscal 2020 was funded by monetary inflation (the other third being from revenues which fell sharply) we can say that without a miraculous change in circumstances and financing policies, the dollar is on a hyperinflationary course.”

“The government is ensnared in a debt trap…”

Gold and silver will rise as dollars are devalued. They will spike higher when people panic out of fiat currencies into something real. See below. 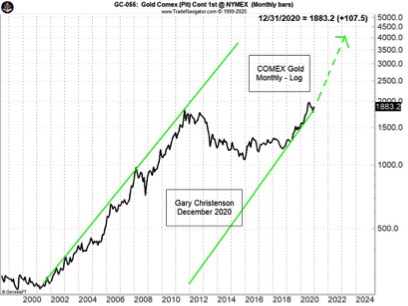 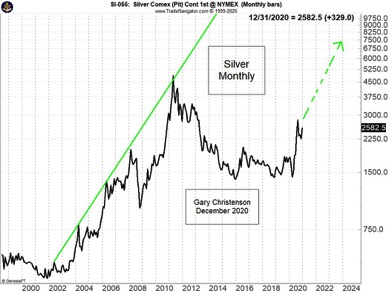 When will a reset occur? What will a cup of coffee cost when the reset occurs? Don’t know…

Reminder: Argentina lopped off 13 zeroes from their peso in 80 years—a devaluation of 10 trillion to one against the U.S. dollar. 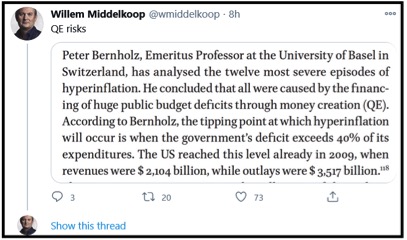