All Eyes on the Dollar Index

Most of us are waiting on the eventual Fed "pivot" and reversal to their interest rate policy. When this comes, risk assets will again soar, and this includes COMEX gold and silver. But when will this finally occur? The U.S. Dollar Index will hold the clues.

In the five weeks since that September meeting, nothing has changed, even though shills like the Wall Street Journal would have you believe otherwise in their vain attempts to drive pageviews and subscriptions.

So expect that 75-basis point hike at the conclusion of the November FOMC meeting next week. And then expect 50 basis points more in December. But then what? While there is no doubt that the Fed will soon be forced to capitulate and relent in their rate-hiking schemes—and no doubt that the COMEX precious metals will use that reversal as a cue to begin rallying higher once more—how will we know that the policy change is pending or imminent?

The key will be found in the U.S. Dollar Index. Remember that this index simply compares the US$ to a basket of other fiat currencies, primarily the euro. A full breakdown is shown below: 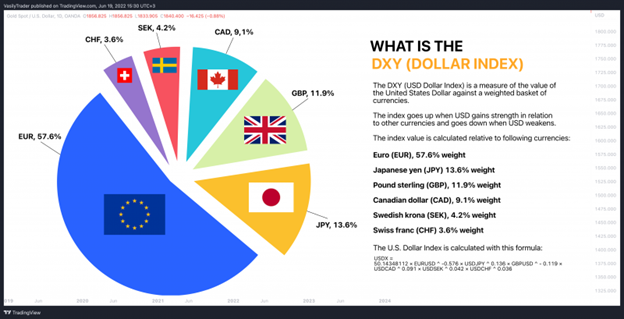 Due to the Fed's rate hike regime, the Dollar Index has been rallying since the summer of 2021. Note the streak of higher highs and higher lows that is consistent with just about any bull market in anything.

But all bull and bear markets eventually come to an end...and this one in the Dollar Index will end eventually too. When will it end? When the Fed finally halts their rate hike regime, of course. However, you must keep in mind that most "markets" are generally forward-looking and proactive, not passive and reactive.

With this in mind, perhaps we can look to the Dollar Index for clues before the Fed pauses and reverses? Maybe we should expect the Dollar Index to top and roll over in advance of this eventual policy shift and not as a response to the shift itself?

To that end, let's revisit that chart of the index but add the key short-term technical indicator of the 50-day moving average. See below:

Note that since decisively breaking about its 50-day on June 16, 2021, the index has made new highs on an almost monthly basis. Note, too, that nearly every new high was followed by a pullback to near the 50-day in a successful test of support. As you can see, it's doing so again, right now, as I type.

So when will the uptrend in the index finally be shown to have ended? When it finally breaks down below its 50-day and begins to make lower lows. As of this moment, a drop below the 50-day and then 110 would signal that the uptrend has been broken.

Could this trend change happen in the days to come? Of course. But it's really not a question of could this happen. Instead, it's a question of when will this happen. Because it's coming, of that you can be certain. And it will occur well before the Fed actually announces that they're finished with their rate hike and "quantitative tightening" schemes.

When the Dollar Index begins to roll over and fall, you can be certain that the lows for COMEX gold and silver are in for months to come. For now, it appears that the lows for COMEX silver have already been seen. COMEX gold, on the other hand, is still trending lower and showing the opposite of the bull market in the US$—a streak of consistently lower lows and lower highs.

Again, you should expect the U.S. Dollar Index to anticipate the eventual Fed policy reversal and begin moving lower well in advance. When this happens, the all-clear can be sounded and you can buy more physical metal with confidence that prices will once again trend higher. So, keep an eye on that Dollar Index. It will hold the clues.